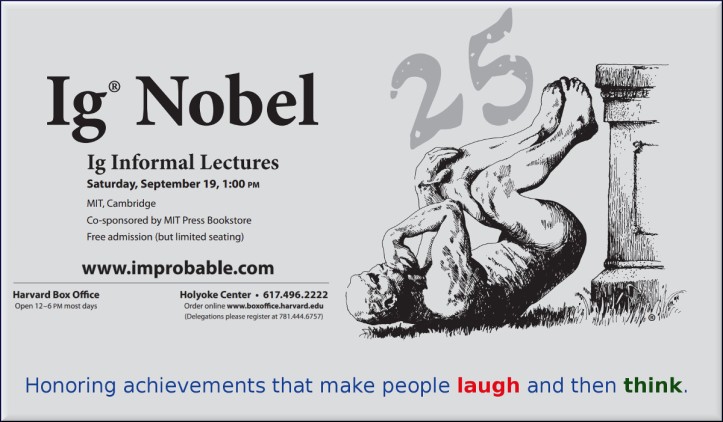 The 2015 Ig Nobel awards have been as comical as usual.

Image re-composed in Gimp from the official poster (PDF).

All have been very well-deserved

recipients, but my favorites are:

MATHEMATICS PRIZE — Elisabeth Oberzaucher [AUSTRIA, GERMANY, UK] and Karl Grammer [AUSTRIA, GERMANY], for trying to use mathematical techniques to determine whether and how Moulay Ismael the Bloodthirsty, the Sharifian Emperor of Morocco, managed, during the years from 1697 through 1727, to father 888 children.

BIOLOGY PRIZE — Bruno Grossi, Omar Larach, Mauricio Canals, Rodrigo A. Vásquez [CHILE], José Iriarte-Díaz [CHILE, USA], for observing that when you attach a weighted stick to the rear end of a chicken, the chicken then walks in a manner similar to that in which dinosaurs are thought to have walked.

PHYSICS PRIZE — Patricia Yang [USA and TAIWAN], David Hu [USA and TAIWAN], and Jonathan Pham, Jerome Choo [USA], for testing the biological principle that nearly all mammals empty their bladders in about 21 seconds (plus or minus 13 seconds).